The VQ Lark is a stylish DAB radio alarm clock with a modern twist. It certainly looks the part, with a gorgeous wool casing and large, easy-to-read screen. But how does it measure up performance-wise? We put it to the test in another of our in-depth reviews. Read on to find out how we got on with it! 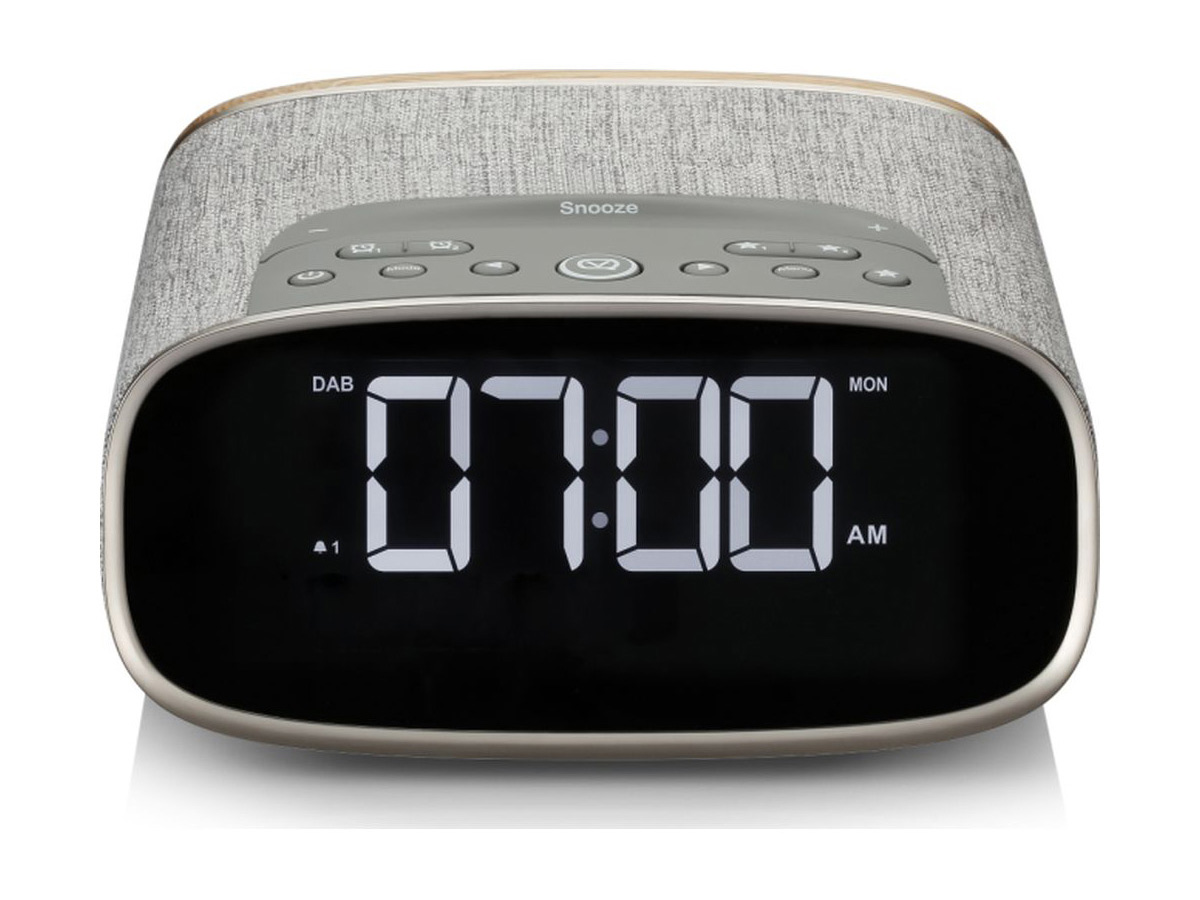 Compared to VQ's other DAB radio alarm clock, the Rosie Lee, the Lark is a bit more traditional in appearance. For one thing, it has an extra-large four-inch screen, making it easier to tell the time at a glance. To ensure that you can always read it clearly, VQ's designers have set that screen back at an angle. With many clock radios, you can only see the scree

n properly straight-on. Not so with the Lark- while you're running around getting ready, you can always keep one eye on the time. The screen also has five brightness settings, and it can be set to automatically adjust depending on the light in the room. That way, it's bright enough to see during daylight hours, but it won't keep you awake at night.

But while it might be traditional in the way it works, the VQ Lark is right up to date in its design. There's a nice fabric wraparound case covering the main body of the radio, available in a choice of grey or black. It's certainly much nicer than the plastic casing you get on most clock radios,and gives the radio a real premium feel. The black panel, meanwhile, is made out of wood, in either oak or walnut effect to better match the colour of the main body. To top things off, the screen is bordered by a neat chrome frame for the perfect finishing touch. 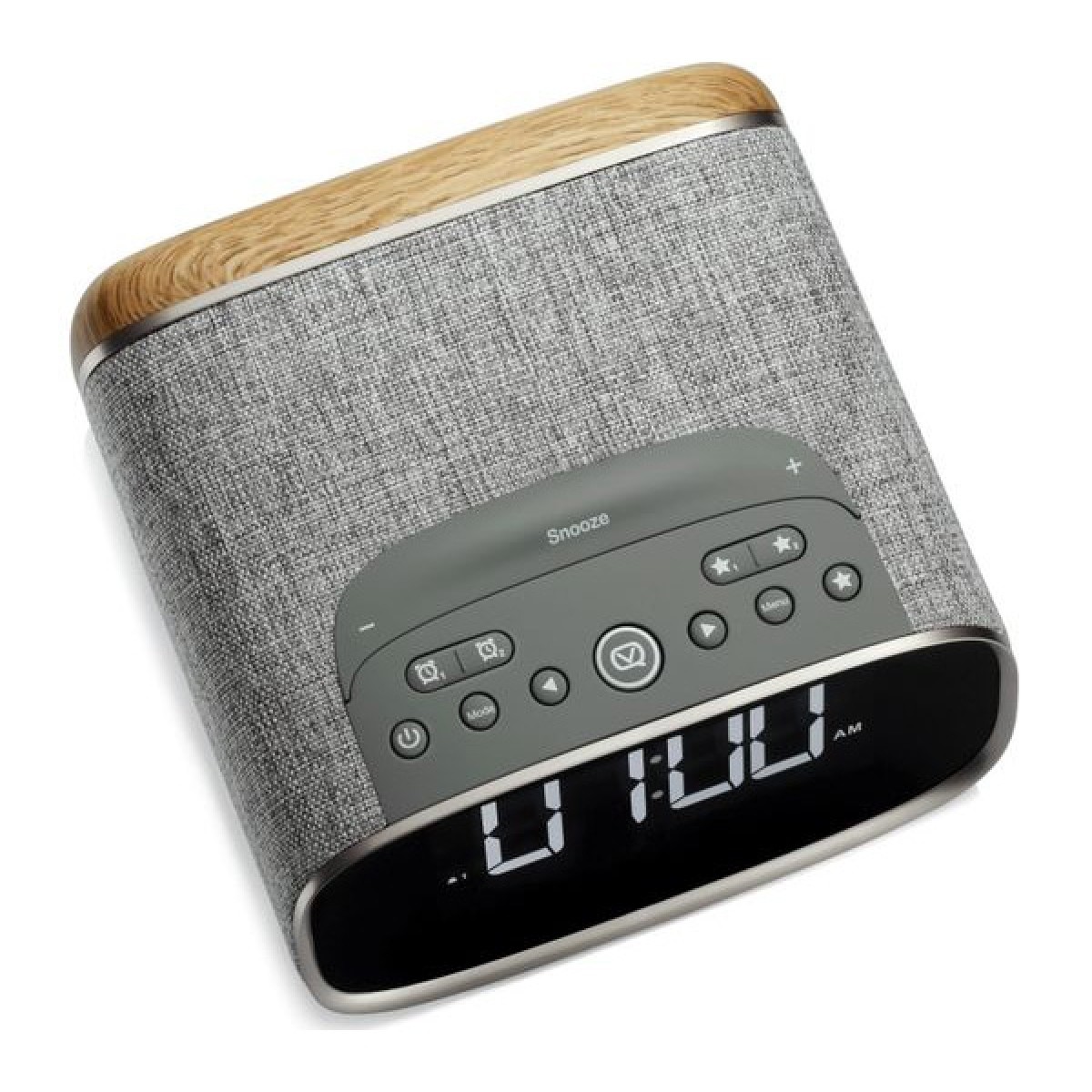 Unusually for a radio alarm clock, the VQ Lark actually has full stereo sound. There are two 3W speakers, giving you a total 6W output. While it may not be the loudest radio around, let's be honest- you won't really want something that's going to blast your ears off first thing in the morning! If you do want to crank things up, though, the Lark can go fairly loud without any audible distortion.

The Lark also has a passive bass radiator on the underside of the unit. This isn't quite enough to provide the kind of cabinet-shaking rumble you'd get from a larger speaker system, but it does make a difference. The Lark offers a nice balanced listen with good separation, and speech in particular is very clear. 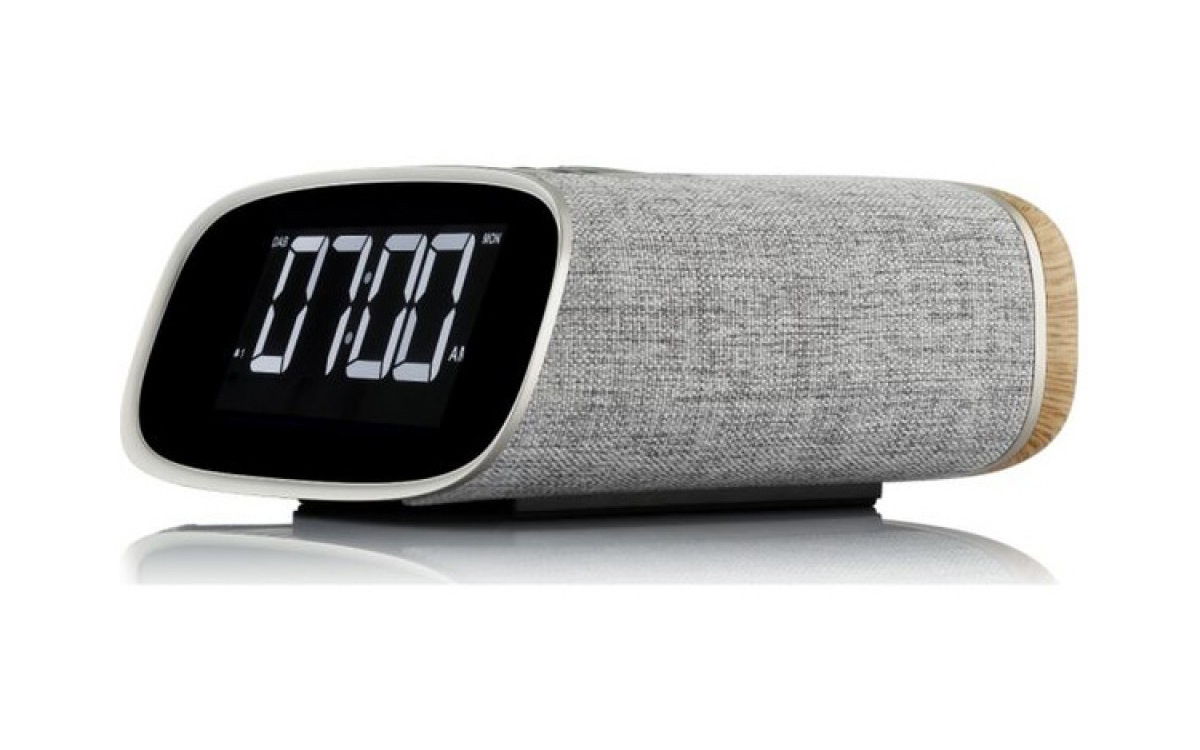 Here's where the VQ Lark really sets itself apart from most radio alarm clocks. For one thing, it's more than just a DAB radio. It also includes Bluetooth connectivity, which means you can link up your phone or tablet to listen. If you like to listen to podcasts as you drift off to sleep, or just feel like listening to something that's not the radio, then this is a very welcome addition. And if your digital device doesn't support Bluetooth, then there's also a 3.5mm port on the Lark for a wired connection, too.

Like all of VQ's digital radios, the Lark gives you the option of setting station presets. Unlike most of their other models, though, the Lark actually has dedicated preset buttons, so you don't have to scroll through a menu to find the station you want to listen to. Instead, Perfect for changing stations when you've just woken up!

Lastly, the Lark comes with a few features geared around it being a clock radio. There's the ability to set dual alarms, so you can have one for weekdays and one for weekends. It also has two USB charging ports on the back, so you can recharge your mobile overnight while saving space on precious bedside plug sockets.

The VQ Lark is one of the best DAB radio alarm clocks on the market. Not only does it look great, but it also comes with a wide range of features that makes it ideally suited to your bedside cabinet.