The Roberts RT200 is a turntable. Roberts are best known for their radios with vintage charm, but this is a device that brings an old-school format right up to date. But is it any good? We put it to the test in another of our in-depth reviews. Read on to find out what our experts thought of it!

We knew we were in for a well-built turntable before we even took the RT200 out of the box. That's because its a remarkably heavy model, weighing in at over 6kg. That's mostly down to the material choice here. While many turntable brands are content to make their products from plastic, Roberts have gone down the real wood route for the RT200. Unlike speakers, where the choice of material affects the sound quality, it's mostly an aesthetic choice here. Still, it undoubtedly looks lovely, and makes a refreshing change from the plain black or silver of its rivals.

In terms of basic functionality, the Roberts RT200 is pretty much the same as the RT100- after all, they are both designed to play records. However, there are a number of key differences which make a significant difference. The most obvious one, though, is the design. While the RT100 has an all-wood body, the RT200 has a brushed-metal plate on the front for a bit more flair. We have to say, turntables aren't usually the most exciting-looking products, especially when compared to Roberts' radios. However, this small tweak adds a little je-ne-sais-quoi to the RT200 and makes it a very attractive product indeed.

The real difference between the RT200 and its smaller sibling lies under the hood, though. The RT100 is a belt-driven model, which means you need to physically attach the belt when you first set it up. The RT200, in contrast, is direct-drive, which means one less thing to worry about. You'll still need to screw on the stylus cartridge and pop the platter on, so there is a bit of work- but not too much.

One minor difference is that the RT200 comes with a rubber slipmat, whereas the RT100 just had a bare plastic platter. How much this matters to you will depend on how seriously into vinyl you are- you may well have a slipmat already, but it's certainly a welcome addition. Not only does it keep the records in place securely, but it also looks quite a bit nicer and matches the minimalist style of the turntable itself. 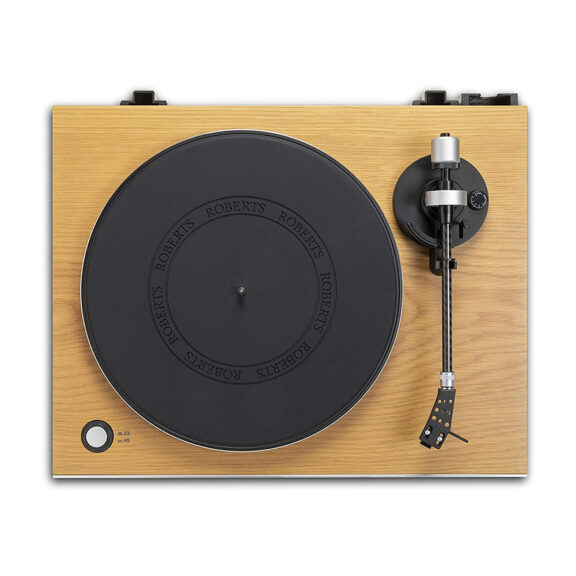 The Roberts RT200 offers a really well-balanced sound. That's a smart move from Roberts, since it means the turntable is sure to please everyone. Some models are more suited to certain types of music, but when we tested the RT200 with a random selection of records, its performance was never less than great. It comes with an Audio Technica AT-95E moving-magnet cartridge included, which is a big step up from the cheaper cartridges that come with a lot of turntables at this price point.

Of course, there are turntables that cost several times the price of the RT200 out there. It therefore can't claim the title of heavyweight champion of the vinyl world. Pound-for-pound, though, it's superb, and enough of an improvement over the RT100 that it justifies the jump in price. 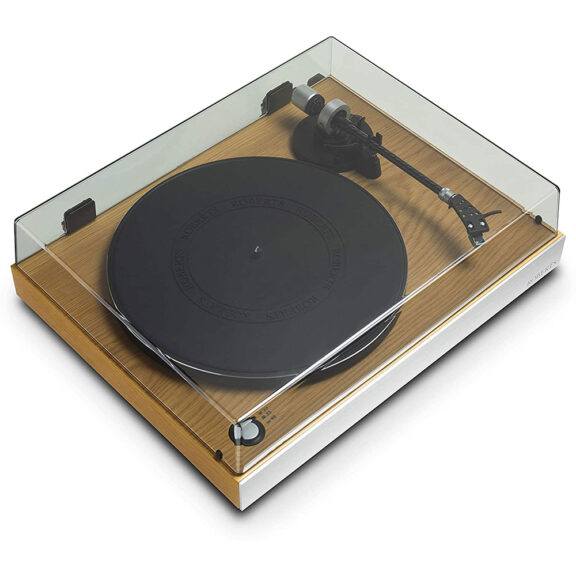 An emerging theme in this review is that the RT200 is pitched somewhere between entry-level and premium. It boasts the sound quality of a more expensive turntable, but keeps the user-friendliness that budget models offer. That extends to its list of features, too. If you've ever set up a turntable before, then you'll know what to expect. If you haven't, then an exceptionally clear set of instructions walk you through every step.

We mentioned this in our RT100 review, but the RT200 has a built-in preamp stage. This means you don't need a separate amplifier; instead, you can just plug some speakers directly into the turntable. Not only does this help to offset the price a bit, but it also saves you some valuable space in your audio setup.

It also has a USB output, so you can plug it into your computer and rip audio from records. As is almost always the case with these things, there's no included software- you'll have to download Audacity. To be honest, this is a feature that most people won't actually use, since virtually everything is either on streaming services or YouTube already. You also lose a little bit of the audio fidelity when transferring music; not a huge amount, and not even enough to really notice when you listen to the files back, but not quite up there with the sound you get from the turntable itself. Still, for those who are interested, it's good to have this option, and one we did have fun playing around with during testing.

The Roberts RT200 has semi-automatic functionality- which, in layman's terms, means that it stops playing when it reaches the end of a side. It's not as fancy as fully-automatic turntables, but it's definitely a useful feature to have. If you forget to turn off the turntable when you've finished listening to a record, or if (like us) you're just too lazy to always get up to do it, then it saves unnecessary wear on the stylus. 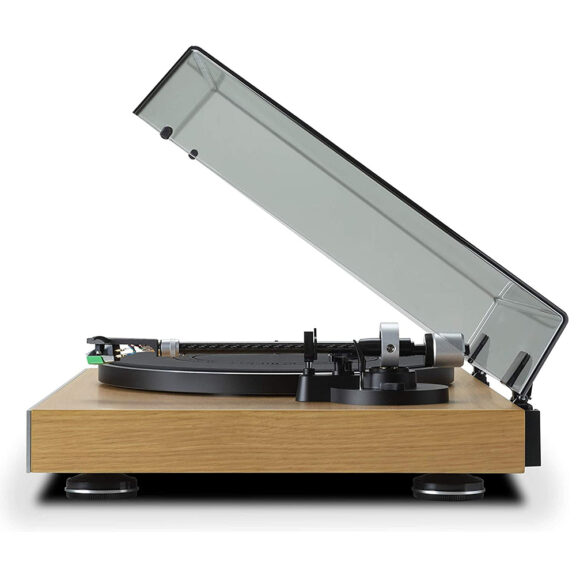 If you're looking for a turntable that combines the user-friendliness of an entry-level model with the sound quality of a more expensive one, then the Roberts RT200 is the choice for you. The fact that it looks quite so lovely helps as well, as does its feature set. This is a record player that offers excellent value for money, so we can't recommend it enough!