The D-Link Covr-C1203 is the latest addition to our range of mesh WiFi products. D-Link themselves have a long history of building affordable yet high-quality routers, but the Covr is their first entry into the mesh market. So, how does it measure up against the competition? We put the Covr through its paces, and you can find out how we got on below.

Related: Mesh WiFi Vs. WiFi Repeaters: Which Is Right For Me?

The D-Link Covr is dual-band, which is a serious step up from a regular router. By using two separate frequencies, it’s far more flexible than a normal router, and so better for supporting multiple devices at once. D-Link promise connection speeds of up to 1.2 Gbps, which is certainly impressive. However, that’s only on paper. The real performance of a router depends on all manner of factors, from the basic broadband speed to wall thickness, placement, and so on. The only way to find out how the D-Link Covr performs in practise was to test it out ourselves- so that’s exactly what we did.

For our analysis, we tried out the Covr in a converted bungalow which gets pretty poor WiFi coverage upstairs. In addition, the room where the router normally sits has fairly thick walls. That means the WiFi signal strength can be rather patchy downstairs at times, especially when people are walking about in the hall. Up until now, we’d been using WiFi boosters, but they aren’t the most reliable of devices. To test out both connection speeds and range with the Covr, we only set up the Cover Points downstairs at first.

First off, the living room. Since this Cover Point was plugged directly into the old router, we had high hopes here. We’re pleased to say that we weren’t disappointed, as we measured download speeds of around 21MBps. That’s a significant improvement on past performance, and a promising start. What we really wanted to find out, though, was how far we could get before that speed dropped. So, with our test iPad in hand, we went walkabout to investigate.

In the bedroom above the living room, we usually see a noticeable drop-off in connection speeds. Not so with the Covr, though. Even though we were still connected to the main Cover Point, download speeds were still an impressive 17MBps. If you use the internet upstairs a lot- for instance, streaming films while you’re in bed- then it would make sense to set up a Cover Point up there. When we tried this out, we achieved similar speeds to the main router connection.

Even in the back bedroom, which usually struggles to get any WiFi at all, the D-Link Covr proved a big help. The download speed was still around 9MBps, which isn’t earth-shattering, but still plenty fast enough for most purposes. Again, that figure based on the Cover Points being located downstairs. With one upstairs, there was still a slight drop-off here, but only down to around 18MBps- a huge improvement from our starting point.

If you need an even faster and more reliable connection, then each Cover Point comes with two ethernet ports built-in. In comparison, the BT Whole Home WiFi only has one port on each node. The extra space can really come in handy if you’re planning on plugging multiple devices directly into the Covr. Since only one unit needs to be connected to your phone line, you can use the other two to enjoy superfast wired speeds wherever you need it. 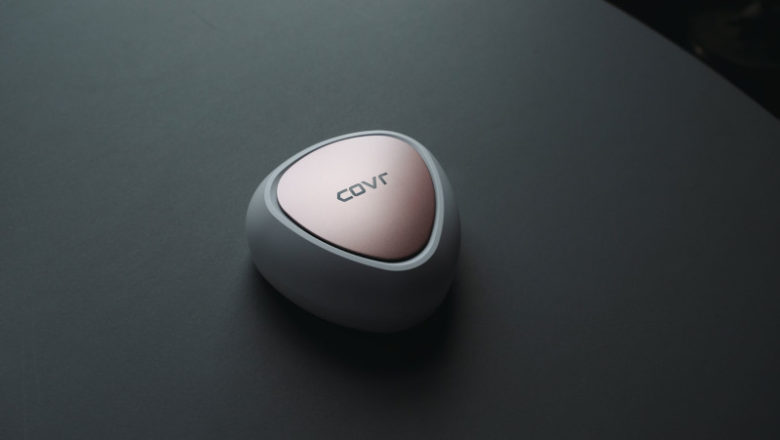 With most mesh WiFi routers, design isn’t a big deal. They tend to be fairly uniform in build, typically just a plain white box. It’s refreshing, then, to see D-Link try something a bit different with the Covr. As soon as we took it out of the box, it was clear that this wasn’t your average piece of tech. The unit itself is shaped like a guitar pick, and wouldn’t feel out of place in a sci-fi movie.

The main thing to mention here, though, is the interchangeable face plates. By default, each Cover Point comes with a nice brass-coloured cover attached. Inside the box, though, you’ll find a rose gold one and a titanium blue one, allowing you to mix and match to best suit the room around it. It might be just a cosmetic touch, but it  makes the D-Link Covr a much more pleasing piece of tech.

While we’re on the topic of design, we should probably also mention the LED lights on each Cover Point. These glow in different colours to show you the current status of your WiFi network, so you can easily get this info at-a-glance. It’s certainly a useful feature, but during testing we found these LEDs to be brighter than most. Luckily, if you find they’re too bright then you can easily just switch this feature off.

Most mesh wifi routers are incredibly easy to set up. However, the D-Link Covr is even simpler than most. All of the Cover Points come pre-paired, and there’s a QR code on the bottom of each one. You just scan that within the D-Link app, and it’s ready to go. The app then tells you where to place each Cover Point for the best connection. This can be a bit hit-and-miss- we found that it was placing the nodes too close together to get the best coverage. Instead, we just tried placing it wherever you need it most, and then checking the connection speed manually. 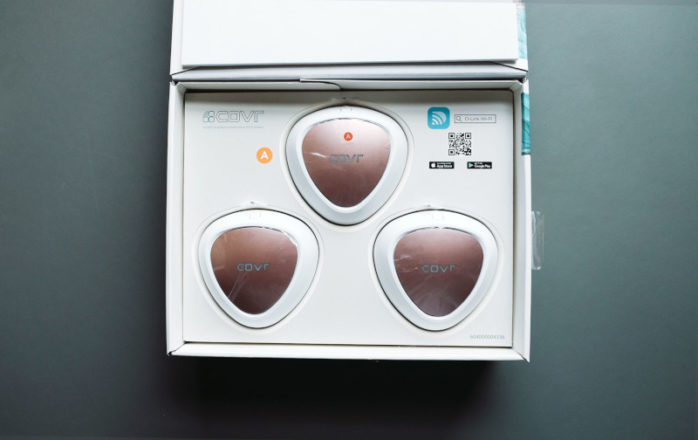 As a more cost-effective dual-band mesh WiFi router, the D-Link Covr doesn’t have quite so many features as top-end models. However, it still comes with more than enough features to satisfy most users. Within the D-Link app, you can use parental controls, allowing you to control access times for certain devices. This is ideal for ensuring the kids get to bed on time, instead of staying up half the night watching YouTube videos. You also have the option of setting up guest networks, so that others can connect to the internet without having any access to your devices.

Technically-minded users might find that the in-app options aren’t in-depth enough for their liking. Luckily, though, there’s a web portal which lets you dig a little deeper into settings and controls, allowing you to adjust firewalls and so on. It looks like D-Link don’t want to confuse casual users with the app, but it’s good that those options are still out there. One thing we would have liked to see is the ability to give certain devices priority for connection speeds. This is a feature that many other mesh WiFi routers offer, so it’s unusual that it’s missing from the Covr. However, we found that the smart steering feature did a decent job of managing this automatically.

As a cost-effective mesh WiFi router, the D-Link Covr is an outstanding choice. With superb performance and a unique design, D-Link have done an excellent job with their first mesh offering. While it would be nice to see a few more features included, there’s enough to keep most users happy. Beating similarly-priced models like the Google Whole Home WiFi, the Covr more than earns its place as our top pick for mesh routers.